Get A Free Estimate

Above and beyond what I expected 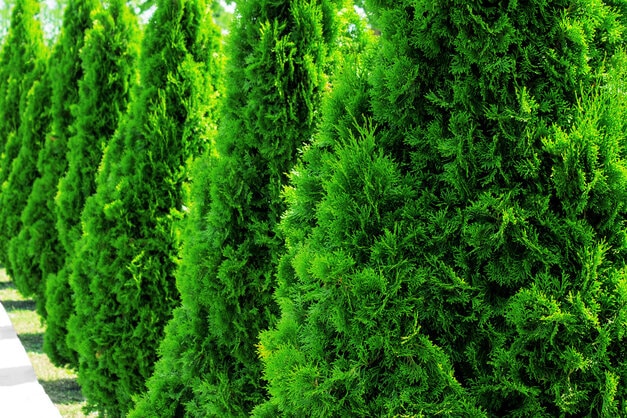 PrevPreviousWhat Should You Do If a Winter Storm Downs a Tree?
NextHow to Properly Mulch Trees for WinterNext

If you are sick of that rickety fence that surrounds your yard, you might want to plant evergreen shrubs in its place as opposed to installing yet another fence. Well-maintained evergreen shrubs are beautiful, and as their name says, they stay green all year. This means they give you privacy and natural interest all year. Here are some evergreens that are good privacy screens and easy to maintain.

Also called the Japanese cedar, this fast-growing tree isn’t really a cedar. It can grow between 30 and 40 feet tall with a 15- to 20-foot spread. It does well in the sort of clay soil that can defeat other shrubs and needs medium watering, full sun, and some protection from the winds of winter. Its evergreen needles are pointed, but they’re also soft and fragrant.

This beautiful evergreen with a pyramidal habit can grow to 10 to 15 feet tall with a 4-foot spread. Its growth rate is considered moderate, and its needles are soft, dense, and feathery. It’s also very cold-tolerant and can thrive as far north as hardiness zone 3.

This evergreen has a more rounded form than the arborvitae, and its needles are a deeper green. It is fast growing and quite heat tolerant.

There are many species of holly, but the Nellie Stevens holly is just right for hardiness zone 6. This evergreen is prized not just for its glossy green leaves but also for its cheerful red berries. It is one of the easiest shrubs to grow and needs minimal care after it’s established. Not only this, but it holds up well under high humidity, heat, and cold. It also resists diseases.

Of the same genus as the emerald green arborvitae, the thuja green giant can grow between 40 and 60 feet tall with a 10- to 15-foot spread, so it’s best to plant saplings 5 to 8 feet apart for a good privacy hedge. This pyramidal shrub grows very quickly and handles heat so well that it can thrive in hardiness zone 9. It tolerates drought and resists diseases and pests.

Like the holly family, there are many species of yew, but the hicks yew and other cultivars of Taxus baccata are just the things for hardiness zone 6. Though it grows slowly, over time this yew makes a famously dense hedge that springs back after hard pruning. The hicks yew is much wider than it is tall and usually grows to about 6 feet in height but 16 feet in width. It does well in full sun to full shade. Like the holly, the yew produces attractive red berries.

These are only a few of the evergreen shrubs that can make a screen that both adds beauty to your yard and protects your privacy. To learn more about functional landscaping or to set up an appointment for tree trimming or another service, give us a call at Nationwide Tree Service in Pasadena, Maryland.

SCHEDULE SERVICE WITH ONE OF OUR TRAINED STAFF TODAY!